Sometimes when you want to improve, you need break down and reform anew. You need to explore new territory and challenge yourself. There are a few things I’m pretty terrible at in regards to miniature painting: painting true metallic metals, and also painting large areas of flesh. There are probably an abundance of other things I’m bad at but those two things for sure. So, I picked up GW’s new Khorne Skull Priest to practice my flesh. He’s a big hunk of meat, so I figured it’d be good practice.

I started with the flesh, as it’s the largest part of the mini. Comparing it to GW’s, I went with a much lighter skin tone. The skin lacks contrast. I tried to boost that contrast by shading it with a dark blue tone seeing as how the flesh is pinkish and the armor is red, I thought it would provide good contrast. Apparently I’m also garbage at glazing because I had pretty terrible results. I may have watered the paint down too much as the pigments were separating from the medium. It went on pretty thick in the recesses of the back muscles making it look strange. Oh well, learning experience.

I then went onto the red armor, which I have a bit of experience with painting Blood Angels. Started with Mephiston Red, glazed in shadows using Scourge Brown and did some corrections with Mephiston Red. At this point it wasn’t really popping. So I glazed the shadows with pure black, did some line highlighting with Evil Sun Scarlet, and then that + white to really drive the red. It turned out really well. The shin guards are my favorite part of the mini.

After that, I moved onto black. I’ve painted black cloth on my last three projects and I’m really really starting to enjoy it. It’s a little hard to see but I feel as though I’m starting to get a hang of blending greys. My brightest grey is Codex Grey and then I blend down to a Vallejo Game Color Black. The skirt is kind of obscured by the axe, but its under there looking pretty.

Moved onto metallics which are my bane (TMM and NMM, can’t do either). I kind of just let the reflective pigment of metallic paint do their job. Tried to mix a cool brass color with Balthasar Gold, Runefang Steel, a touch of Vallejo Gun Metal Blue. Washed it in a watered down purple to drive that coldness and also contrast of the model (as it’s mostly red). Layed up successively more silvered brass colors until finally at pure silver. The silver axehead and chains were done in a similar fashion except with a black wash instead of purple.

All in all, I love the miniature. It was a bit annoying to paint because the horns are attached to the torso making it hard to get the brush into his pectoral area. I’m happy with my results and look forward to applying my new knowledge to the next project. 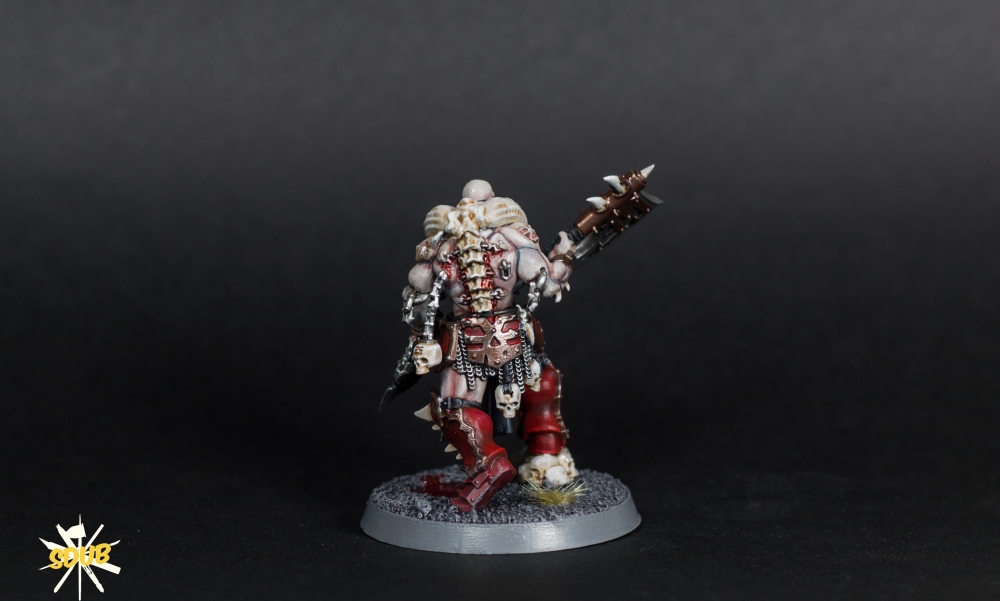 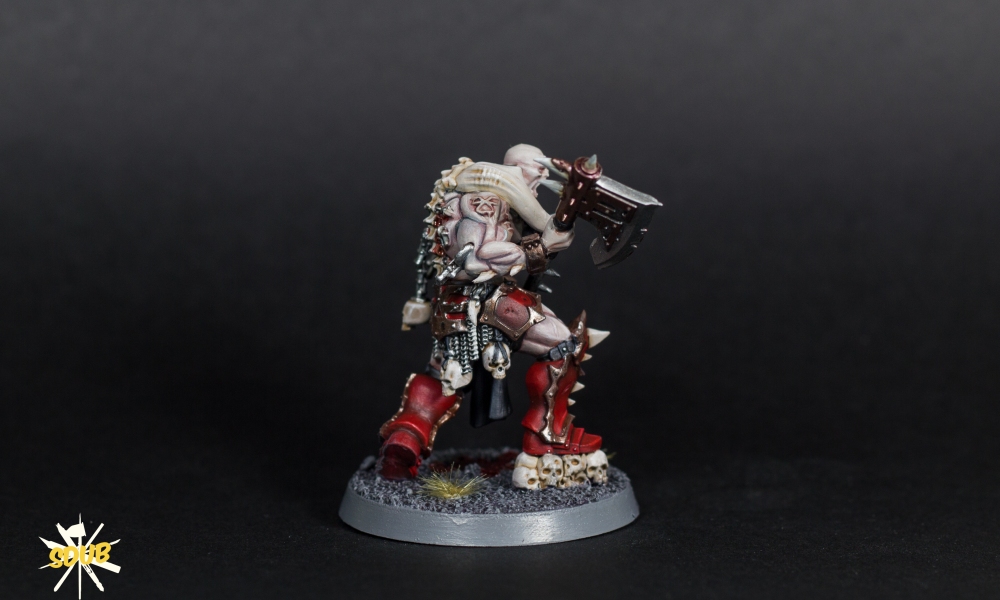 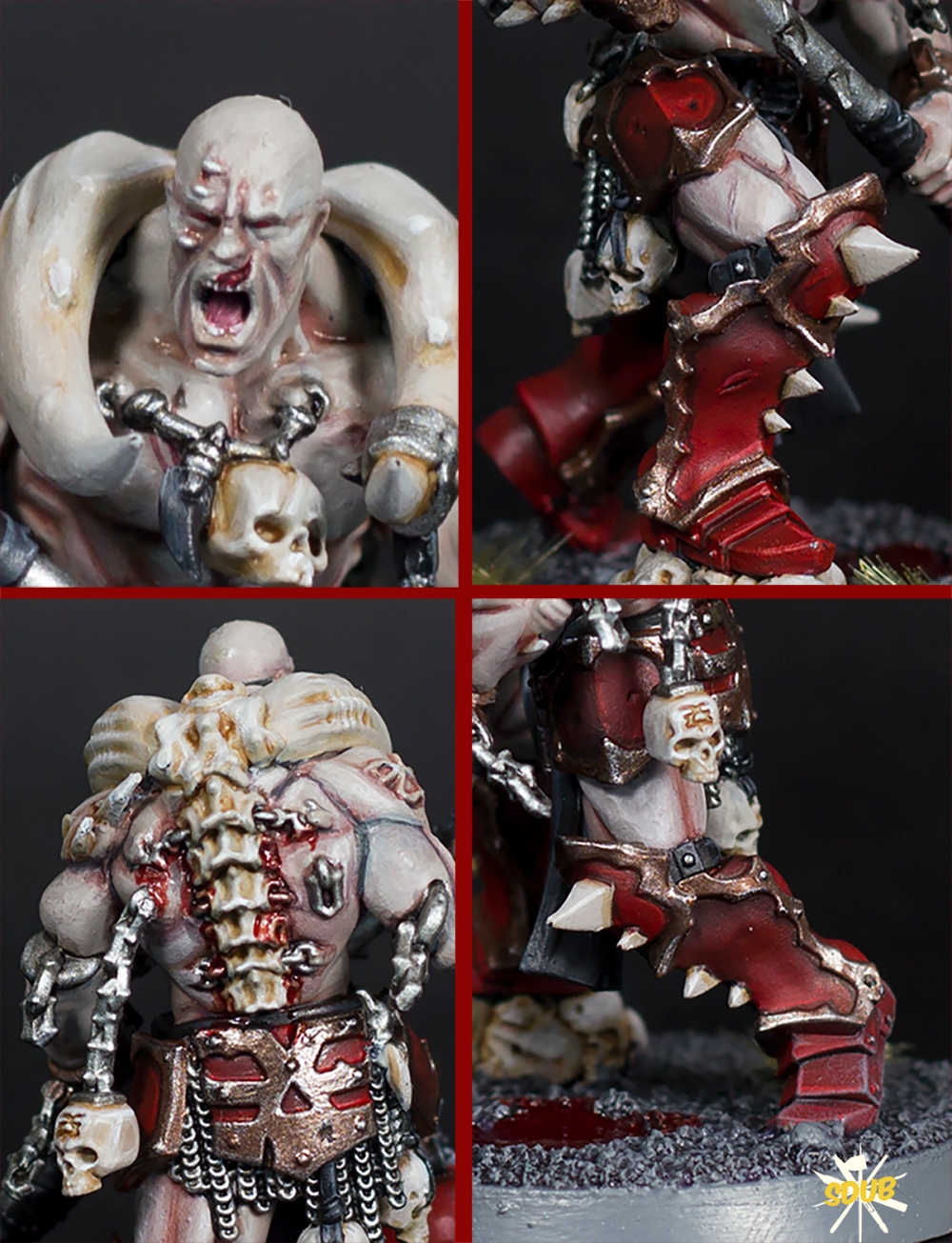 In this week’s youtube video we analyzed the effects of various colors of primer (black, grey, white) on various paints (Citadel Golden Yellow, Citadel Mephiston Red, and Citadel Enchanted Blue). We took a sheet of plastic, primed 3 strips of each primer, and laid out a grid. As you progress down the rows, you increase the number of layers I applied. The purpose of the test was to see how many coats of paint you needed to apply to eliminate the effect of a base coat.

However, when I realized that I had an excuse to graph something I decided to start collecting values. First things first, I needed to properly expose the photo that I took so that there were no hot spots of light that would throw off my “pixel peeping” (that phrase sounds gross but it isn’t) accuracy. In order to ensure correct exposure I used the False Color setting on my Canon DSLR with magic lantern firmware.

After that, I imported the raw image into Photoshop and averaged the color values of each swatch. I did this by applying an “Average Blur” to each color using the selection tool.

After that, I added a Black & White adjustment layer and set about measuring values.

I used Photoshop’s information panel and the cursor to pull pixel brightness values from the averaged areas of each swatch. I then graphed each value.

The results are more or less expected but it’s cool to see exactly how different each paint is. You can clearly see that Enchanted Blue covers much better than Golden Yellow. With that being said if you wanted to spray a white highlight on your model before painting (to mark out your lights), you would need to water down your Enchanted Blue even more so than Golden Yellow to retain some of that color information.